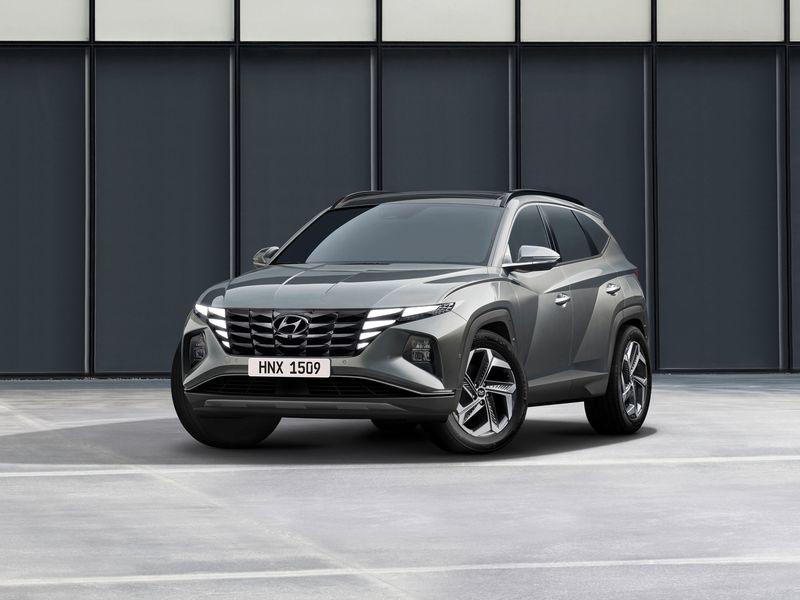 Hyundai’s next-generation Tucson compact crossover — to be offered in both long and short wheelbases as well as a hybrid and plug-in hybrid — will hit U.S. showrooms in the first half of 2021 for the 2022 model year, after making its sales debut in the home market of South Korea this month.

The redesign of Hyundai’s bestselling U.S. nameplate introduces bold exterior styling with angular sheet metal and fender flares. The design is highlighted by an intricate grille accentuated by daytime running lights that jut from the center like a pair of wings.

Hyundai pulled the wraps on the vehicle online late Monday.

Under the hood, the Tucson will offer a Smartstream 2.5-liter, direct-injection, four-cylinder gasoline engine or a 1.6-liter, turbocharged, direct-injection hybrid or plug-in hybrid setup.

The 2.5-liter engine churns out about 187 hp, while the hybrid powertrain generates 227 hp.

Hyundai also plans an N Line sporty variant for global markets. Details of that rollout will be announced later.

The latest Tucson is packed with a slew of safety features under Hyundai’s SmartSense suite of driver-assist technologies, including forward-collision avoidance assist with pedestrian detection, lane-following assist, remote smart parking assist and a surround-view monitor.

Hyundai is also dialing up the digital experience with the next Tucson.

Features include a digital key app that turns a customer’s mobile phone into a smart key. Drivers can operate certain functions, such as starting the engine or air conditioning, from 90 feet away. A newly added car-to-home feature allows customers to control smart home appliances on the go. For example, home air conditioning or heat can be operated and adjusted before pulling into the driveway.

Inside, there is a full-touch display accessible through voice control. Top trims receive a 10.25-inch full-touch navigation system with split-screen functionality for multitasking.

The onboard system is compatible with wireless Apple CarPlay and Android Auto.

To keep the cabin clean and comfortable, the Tucson’s climate system monitors and purifies the air. A new technology also reduces moisture from the evaporator to keep the air-conditioning system clean and odorless. The system and car-to-home connectivity will be offered in select markets.

Hyundai said previously the Tucson will be the first nameplate in the compact crossover class to be offered with two wheelbase options.

In the first six months, U.S. sales of the Tucson fell 12 percent to 57,941, ranking it No. 8 in the cutthroat segment behind such heavyweight contenders as the Toyota RAV4, Honda CR-V and Chevrolet Equinox.

Globally, Hyundai has sold more than 7 million Tucsons since its 2004 launch.

This year, the Tucson topped the compact SUV category in J.D. Power’s annual report card on new-vehicle quality. It edged the Kia Sportage and Equinox in the closely watched Initial Quality Study, which measures the number of problems reported over the first 90 days of ownership.